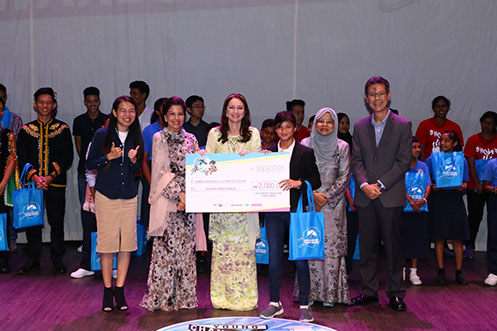 The Young Changemakers Award 2017 was held on 22nd November 2017 at the theatre KuAsh. The Young Changemakers is a platform for children in Malaysia who are doing amazing things or are amazing persons themselves; to be recognized and celebrated for their courage, resilience and inspiring contributions so they may inspire others, especially their peers.

From Seri Kembangan Selangor. Andrew, a 12 year old piano prodigy raised RM65 300 at his first solo recital in September 2017 for the National Autism Society of Malaysia, and to buy a piano for his alma matter, SJKC Shin Cheng (Ladang Harcroft). Andrew wants to use his own passion in the arts to raise awareness and money for causes he believes in.

13 year old app developer Ellysha created an educational app called Zoogle that won the 2016 Technology Innovation for Globalisation by MDec. She will represent Malaysia at the Global Entrepreneurship Summit in India. She believes that everyone can shape the future by empowering one another to succeed.